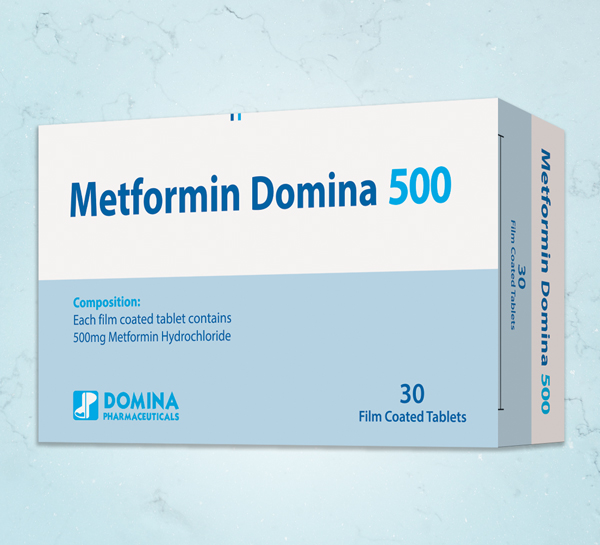 Metformin is a biguanide with antihyperglycaemic effects. It does not stimulate insulin secretion and therefore does not produce hypoglycaemia.

1-Reduction of hepatic glucose production by inhibiting gluconeogenisis and glycogenolysis.

Metformin increases the transport capacity of all types of membrane glucose transporters[GLUTs] known to date.

In humans, independently of its action on glycaemia , metformin has favourable effects on lipid metabolism. This has been shown at therapeutic doses in controlled ,medium-term or long-term clinical studies, metformin reduces total cholesterol, LDL cholesterol and triglyceride levels.

*Metabolism: Metformin is excreted unchanged in the urine.

*Elimination: Renal clearance of metformin is >400ml/min, indicating that metformin is eliminated by glomerular filtration and tubular secretion. Following an oral dose ,the apparent terminal elimination half-life is approximately 6.5 hours.

Treatment of type 2 diabetes mellitus, particularly in overweight patients, when dietary management and exercise alone does not result in adequate glycaemic control.

-In adults, metformin film coated tablets may be used as monotherapy or in combination with other oral anti-diabetic agents, or with insulin.

-In children from 10 years of age and adolescents, metformin film coated tablets may be used  as monotherapy or in combination insulin.

A reduction of diabetic complications has been shown in overweight type 2 diabetic adult patients treated with metformin as first –line therapy after diet failure.

*Hypersensitivity to metformin hydrochloride or to any of the excipients.

*Moderate [stage3b] and severe renal failure or renal dysfunction [CrCl<45 ml/min  or  eGFR<45ml/min/1.73meter square].Acute conditions with the potential to alter renal function such as:

*Acute or chronic disease which may cause tissue hypoxia such as:

-Lactic acidosis: Lactic acidosis is a very rare ,but serious[high mortality rate in the absence of prompt treatment]metabolic complication that can occur due to metformin accumulation. Reported cases of lactic acidosis in patients on metformin have occurred primarily in diabetic patients with impaired renal failure or acute worsening of renal function .Special caution should be paid to situations where renal function may become impaired, for example in case of dehydration[severe diarrhea or vomiting],or when initiating antihypertensive therapy or diuretic therapy and when starting therapy with a non-steroidal anti-inflammatory drug[NSAID].In the acute conditions listed, metformin should be temporarily discontinued.

Other associated risk factors should be considered to avoid lactic acidosis such as poorly controlled diabetes, ketosis, prolonged fasting, excessive alcohol intake      ,hepatic insufficiency and any condition associated with hypoxia

As metformin is excreted by the kidney, creatinine clearance or eGFR should be determined before initiating treatment and regularly thereafter:

• At least annually in patients with normal renal function.

• At least two or four times a year in patients with creatinine clearance at the lower limit of normal and in elderly subjects.

-Surgery: Metformin must be discontinued 48 hours before elective  surgery under general, spinal or peridural  anaesthesia. Therapy may be restarted no earlier than 48 hours following surgery or resumption of oral nutrition and only if normal renal function has been established.

-Pediatric population: The diagnosis of type 2 diabetes mellitus should be confirmed before treatment with metformin is initiated.

Children aged between 10 and 12 years:

The usual laboratory tests for diabetes monitoring should be performed regularly.

Metformin alone does not cause hypoglycemia, although caution is advised when it is used in combination with insulin or other oral anti-diabetics.

*Concomitant use not recommended:

Intravascular administration of iodinated contrast agents may lead to renal failure, resulting in metformin accumulation and an increased risk of lactic acidosis.

*Combinations requiring precautions for use:

-Glucocorticoids [systemic and local routes],beta-2-agonists,and diuretics have intrinsic hyperglycaemic activity .Inform the patient and perform more frequent blood glucose monitoring ,especially at the beginning of treatment .If necessary adjust the dosage of the anti-diabetic drug during therapy with the other drug and upon its discontinuation.

-ACE-inhibitors: They may decrease the blood glucose levels. If necessary ,adjust the dosage of the anti-diabetic drug during therapy with the other drug and upon its discontinuation.

-Diuretics, especially loop diuretics: They may increase the risk of lactic acidosis due to their potential to decrease renal function.

Uncontrolled diabetes during pregnancy[gestational or permanent]is associated with increased risk of congenital abnormalities and perinatal mortality.

When the patient plans to become pregnant and during pregnancy ,diabetes should not be treated with metformin but insulin should be used to maintain blood glucose levels as close to normal as possible in order to lower the risk of foetal malformations associated with abnormal blood glucose levels.

Metformin is excreted into human breast milk. Breast-feeding is not recommended during metformin treatment. A decision on whether to discontinue breast-feeding should be made, taking into account the benefit of breast-feeding and the potential risk of adverse effects on the child.

During treatment initiation, the most adverse reactions are nausea, vomiting, diarrhea, abdominal pain and loss of appetite which resolve spontaneously in most cases. To prevent them, it is recommended to take metformin in 2 or 3 daily doses and to increase slowly the dose.

The following adverse reactions may occur under treatment with metformin:

*Metabolism and nutrition disorders: Very rare: Lactic acidosis ,Decrease of vitamin B12 absorption with decrease of serum levels during long-term use of metformin.  .

Hypoglycaemia has not been seen with metformin doses of up to 85g , although lactic acidosis has occurred in such circumstances.  .High overdose or concomitant risks of metformin may lead to lactic acidosis. Lactic acidosis is a medical emergency and must be treated in hospital. The most effective method to remove lactate and metformin is haemodialysis.

*Monotherapy and combination with other oral anti-diabetic agents:

The usual starting dose is 500mg metformin hydrochloride 2 or 3 times daily given during or after meals. After 10 to 15 days the dose should be adjusted on the basis of blood glucose measurements. A slow increase of dose may improve     gastrointestinal tolerability. The maximum recommended dose of metformin is 3g daily, taken as 3 divided doses.

If transfer from another oral anti-diabetic agent is intended, discontinue the other agent and initiate metformin at the dose indicated above.

Metformin is given at the usual starting dose of 500mg 2-3 times daily, while insulin dosage is adjusted on the basis of blood glucose measurements.

Metformin may be used in patients with moderate renal impairment,stage3a[creatinine clearance(CrCl) 45-59ml/min or estimated glomerular filtration rate(eGFR) 45-59ml/min/1.73 meters square] only in the absence of other conditions that may increase the risk of lactic acidosis and with the following dose adjustments:

The starting dose is 500mg metformin hydrochloride, once daily. The maximum dose is 1000mg daily, given as 2 divided doses. The renal function should be closely monitored[every 3-6 months].

If CrCl  or eGFR  fall<45ml/min or <45ml/min/1.73meters square, respectively, metformin must be discontinued immediately.

*Monotherapy and combination with insulin: Metformin tablets can be used in children from 10 years of age and adolescents. The usual starting dose is one tablet of 500mg metformin hydrochloride once daily, given during or after meals.

A slow increase of dose may improve gastrointestinal tolerability . The maximum recommended dose of metformin is 2g daily, taken as 2 or 3 divided doses.