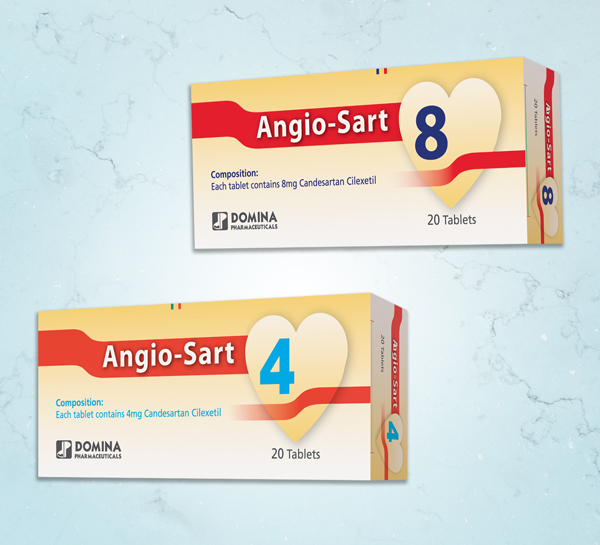 Each tablet of Angio-Sart contains 4, 8, or 16mg candesartan cilexetil.

candesartan cilexetil is a prodrug, it is converted rapidly to the active drug. Angio-Sart blocks the vasoconstrictor and aldosterone-secreting effects of angiotensin II by selectively blocking the binding of angiotensin II to the AT1 receptor in many tissues, such as vascular smooth muscle and the adrenal gland. Its action is, therefore, independent of the pathways for angiotensin II synthesis. Because Angio-Sart does not inhibit ACE (kininase II), it does not affect the response to bradykinin, the incidence of cough is lower by candesartan than ACE inhibitors. Angio-Sart does not bind to or block other hormone receptors or ion channels known to be important in cardiovascular regulation. In hypretension, it causes a dose-dependent, long-lasting reduction in arterial blood pressure. The antihypertensive action is due to decreased systemic peripheral resistance, without reflex increase in heart rate.

Angio-Sart is indicated for the treatment of hypertension. It may be used alone or in combination with other antihypertensive agents.

Angio-Sart should be taken once daily with or without food.

Children: The safety and efficacy of the drug have not been established in children.

Therapy should be adjusted according to blood pressure response. Most of the antihypertensive effect is attained within 4weeks of initiation of treatment.

Elderly: The starting dose is 4mg in elderly patients with normal renal and hepatic function. In the presence of renal or hepatic impairment an initial dose of 2mg is recommended. The dose may be adjusted according to response.

In impaired renal function:  The starting dose is 4mg in patients with renal impairment, including patients on haemodialysis.

In cases of intravascular volume depletion, such as those receiving diuretics or having renal impairment, therapy must be under medical supervision and reduction of the dose will be necessary.

In impaired hepatic function: An initial dose of 2mg once daily is recommended in patients with mild to moderate hepatic impairment. The dose may be adjusted according to response.

Concomitant therapy: Addition of a thiazide-type diuretic such as hydrochlorothiazide has been shown to have an additive antihypertensive effect.

In general Angio-Sart is well-tolerated, The following common >1/100 adverse reactions with candesartan cilexetil were reported: Dizziness/vertigo, headache, back pain, and respiratory infection.

Hypersensitivity to any component of the drug, pregnancy, lactation, severe hepatic impairment, and/or cholestasis.

In patients who are having active renin-angiotensin aldosteron system, such as those receiving diuretics symptomatic hypotension may occur, therefore, these conditions should be corrected prior to administration or they must be kept under continuous medical supervision. When Angio-Sart is used in patients with severe renal impairment, periodic monitoring of serum potassium and creatinine levels should be considered.

It should not be used in pregnancy. If pregnancy is detected during treatment, the drug should be discontinued.

It should not be given during breast-feeding, because of the potential of adverse effects on the nursing infant.

Candesartan is mainly eliminated unchanged via urine and bile and only to a minor extent eliminated by hepatic metabolism. The terminal half-life of candesartan is approximately 9 hours. There is no accumulation following multiple doses.