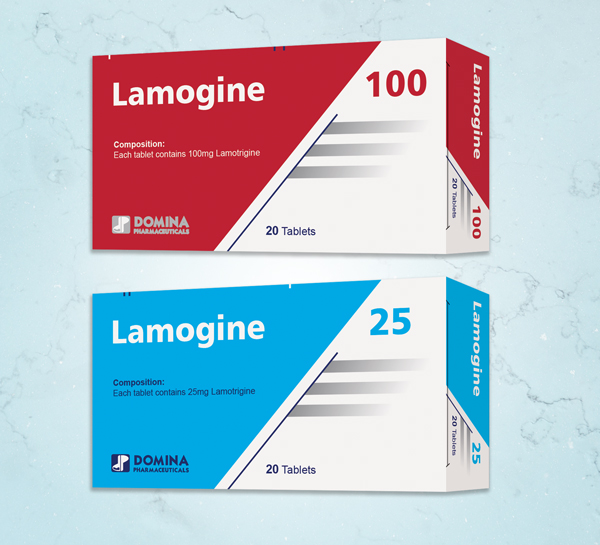 Each tablet contains 25, or 100mg Lamotrigine

LAMOGINE inhibit the voltage dependent sodium currents, stabilizes the nervous membranes, reduces the sustained repetitive firing of neuronal activity, LAMOGINE inhibits the pathological release of glutamate, the amino acid which plays a key role in the generation of epileptic seizure.

Add-on therapy in adults and children over 2 years of age for the same mentioned illness and treatment of seizures associated with Lennox-Gastaut Syndrome.

LAMOGINE therapy should be initiated slowly and gradually increased.

The drug should be gradually decreased (during 2 weeks), when it is to be discontinued, to prevent rebound seizures. There is insufficient information on the use of the drug in children aged less than 2 years.

Adults (and children over 12 years):

It may occur: Headache, nausea, diplopia, blurred vision, aggression, haematologica including leucopenia and thrombocytopenia. It may cause severe rash. The risk of rash is lower with slower titration rates. Patients should be counseled to contact their physician at the first sign of rash. In many cases the rash disappears during continued therapy, except 1 – 2% of patients with rash represent more serious allergic reaction. Occasionally patients have developed the Stevens Johnson syndrome.

Hypersensitivity to the drug.

Orally administrated LAMOGINE is rapidly and completely absorbed Tmx is 1.5 hours in fasted subjects and 3 hours in fed subjects, as food delays absorption but does not affect bioavailability. Its binding to plasma proteins is about 55%. The mean elimination half-life is 24–35 hours.

LAMOGINE is a weak dihydrofolate reductase inhibitor. It should be avoided in pregnancy unless compelling circumstances demand so. It should not be used during lactation.