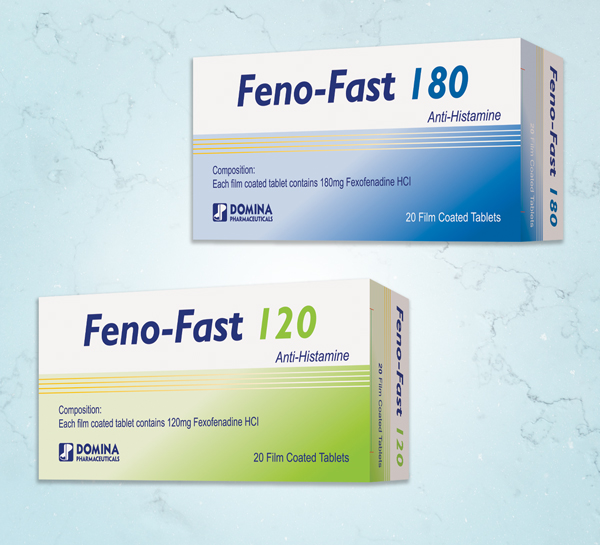 FENO-FAST is a non-sedating antihistamine H1. FENO-FAST is a pharmacologically active metabolite of terfenadine, has long lasting activity, which does not have sedative and anti-cholinergic effects at the recommended dosage. Clinical trials have shown no evidence of cardiotoxicity, even at doses higher than those recommended.

FENO-FAST inhibited antigen induced by bronchospasm and in addition to its actions on mast cell stabilizing it. FENO-FAST does not cross the blood brain barrier. It has shown to have no significant effects on central nervous system function. This means that patients may drive or perform tasks that require concentration.

Hypersensitivity to the drug.

The drug is not interacting with other drugs through hepatic mechanism. Erythromycin or ketoconazol increased bioavailability of the drug. Aluminum and Magnesium anti-acids decreased gastrointestinal absorption of the drug. Therefor, at least 2 hours apart between anti-acids and taking the drug.

The drug is not recommended for use in pregnancy or lactation.

The drug is rapidly absorbed into the body following oral administration with maximum at 1–3 hours. The drug is bound with plasma proteins about 60–70%. Elimination half-life ranges 11–15 hours.