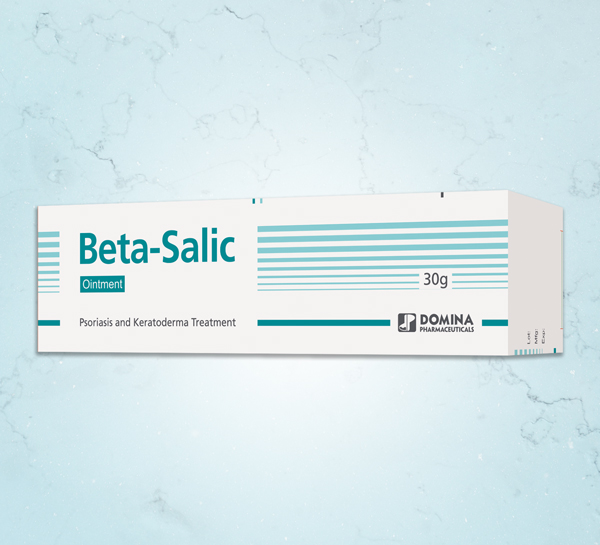 Betamethasone is anti-inflammatory, antipruritic and vasoconstrictor. Salicylic acid is keratolytic.

Beta-Salic Ointment is indicated for the treatment of chronic lichenified eczema, lichen planus, lichen simplex, non-ballons ichthyosiform erythroderma. It is also effective in the less responsive conditions such as psoriasis and chronic plaque psoriasis of the hands and feet, (but excluding widespread plaque psoriasis).

As instructed by physician or otherwise as follows:

Beta-Salic Ointment: Should be applied as a thin layer to affected area, 1–2 times daily, for two weeks.

When Beta-Salic is used for treatment of the face or for children, it should be used for only five days. Occlusion must not be used.

Beta-Salic is generally well tolerated and side effects are rare.

These effects are increased when occlusion is used or in continuous application such as: Burning, irritation, dermatitis, dryness, pruritus, foliculitis, hypertrichosis, rash, hypopigmentation, perioral dermatitis, local atrophy of the skin, striae and superficial vascular dilation particularly on the face.

• Beta-Salic is for external use only and care must be taken to keep it away from the eyes.

• The systemic absorption of betamethasone and salicylic acid may be increased if extensive body surface areas are treated for prolonged periods or with excessive amounts.

• Long term continuous topical therapy should be avoided where possible, particularly in infants and children.

• Topical corticosteroids may be hazardous in psoriasis for a number of reasons including: Rebound relapses following development of tolerance, risk of generalised, pustular psoriasis and local systemic toxicity due to impaired barrier function of the skin.

USE IN PREgNANCy OR LACTATION:

It should not be used in pregnancy. Care should be taken in lactation.