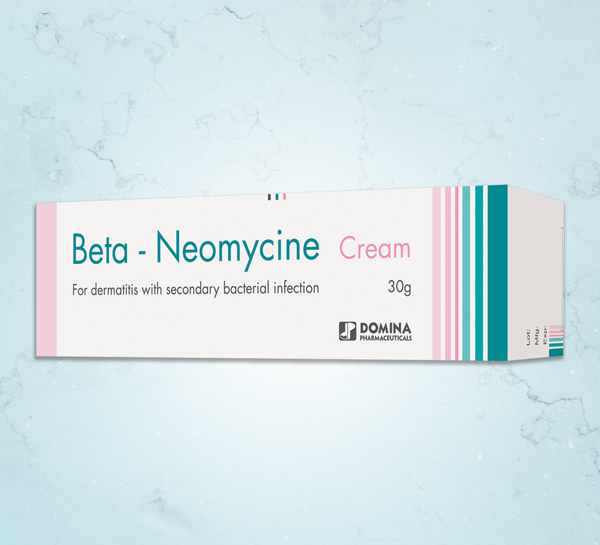 Each 100g Cream contains 100mg Betamethasone (as valerate) and 500mg Neomycin (as sulphate) equivalent to 3400 units per gram.

Neomycin is a broad spectrum, bactericidal antibiotic effective against the majority of bacteria commonly associated with skin infections, it interferes with bacterial protein synthesis.

Apply a small quantity of Beta-Neomycine cream to the affected skin 2 – 3 times daily until improvement occurs. It may then be possible to maintain improvement by applying once a day or even less often.

In the more resistant lesions, such as the thickened plagues of psoriasis on elbows and knees, the effect of Beta-Neomycine can be enhanced, if necessary, by occluding the treatment area with polyethylene film.  Overnight occlusion is usually adequate to bring a satisfactory response in such cases. Thereafter improvement can usually be maintained by regular application without occlusion.

Treatment should not be continued for more than 7 days without medical supervision.

Hypersensitivity to steroid or neomycin sulphate and in those cases: Rosacea, acne, peri-oral dermatitis, skin lesions caused by infection with viruses (e.g. herpes simplex, chickenpox), fungi (candidiasis, tinea), or bacteria (e.g. impetigo). Beta-Neomycine should not be used for the treatment of otitis externa when the eardrum is perforated (because of the risk of toxicity).

Prolonged and intensive treatment with highly active corticosteroid preparations may cause local atrophic changes, particularly when occlusive dressings are used. The face more than other areas of the body may exhibit the atrophic changes. long-term continuous topical therapy should be avoided, particularly in infants and children as adrenal suppression may occur.