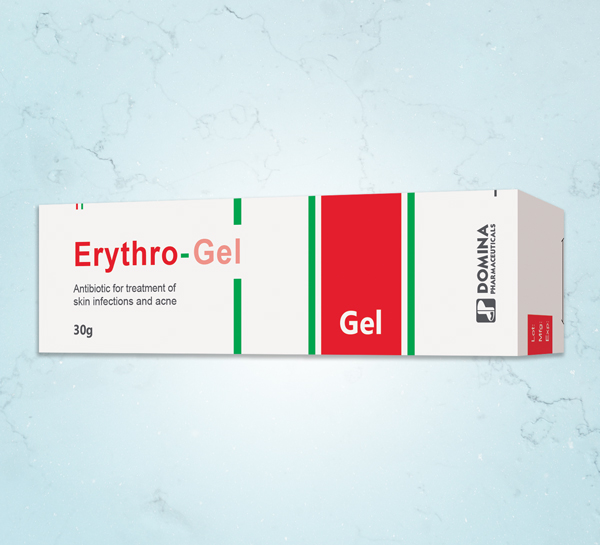 Each 100g contains 4g of erythromycin.

Erythro-Gel is a macrolide antibiotic. It interferes with bacterial protein synthesis and has a bacteriostatic or bactericidal effect. Its effect depends on its concentration and bacterial type.  It has efficiency against most of gram-positive bacteria.

Erythro-Gel is indicated in the treatment of impetigo, wound and burn infections, infected eczema, sycosis vulgaris and acne vulgaris and it is good tolerated by skin. It has the capability of good absorption and penetration to the follicles of sebaceous ducts. It reduces the bacterial colonies in the comedones and its metabolism products.

Erythro-Gel gives good results in the case of infected acne vulgaris. It achieves the removal of pustule formation stage but it hasn’t any effect on the preformed pustules.

Erythro-Gel is for external use only. It is applied to the affected area twice daily after washing with warm water and soap and get completely dry.

Acne lesions on the face, neck, and back can be treated with Erythro-Gel by using enough quantity to cover the affected area.

Cases of dryness, pruritis, tenderness, desquamation, erythema and feeling of burning have been reported.

Erythro-Gel is contraindicated in case of hypersensitivity to erythromycin.

Erythro-Gel should be kept away from eyes, mouth and mucous membranes. The concomitant topical acne therapy should be applied with caution, because cumulative irritation effect may occur especially with the peeling and desquamating agents.

Erythro-Gel could be used during pregnancy or lactation.

Resistance against erythromycin by staphylococci and streptococci is usually combined with cross-resistance against other antibiotics of macrolide type. This resistance does not appear usually during short period of therapy, but occurs on long termed therapy.