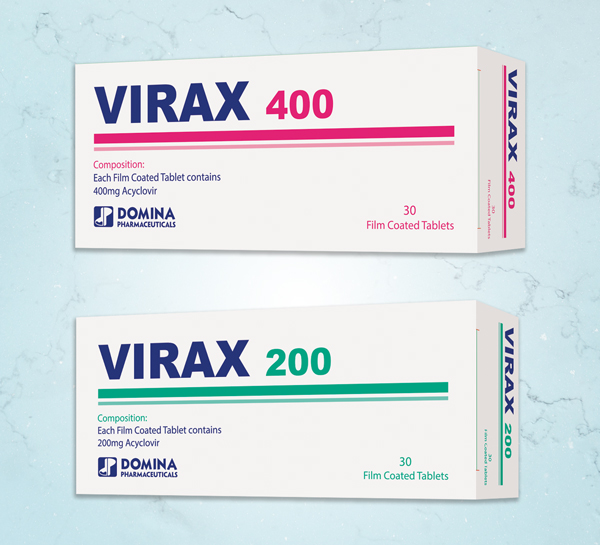 Acyclovir is a synthetic purine nucleoside analogue with in vitro and in vivo inhibitory activity against human herpes viruses, including herpes simplex virus (HSV) types I and II and varicella zoster virus (VSV)

Most of the drug is excreted unchanged by the kidney. Renal clearance of acyclovir is substantially greater than creatinine clearance, indicating that tubular secretion, in addition to glomerular filtration, contributes to the renal elimination of the drug.

9-carboxymethoxymethylguanine is the only significant metabolite of acyclovir, and accounts for 10-15% of the dose excreted in the urine.

In children over 1 year of age The terminal plasma half-life in these patients was 3.8 hours

In the elderly total body clearance falls with increasing age associated with decreases in creatinine clearance although there is little change in the terminal plasma half-life.

In patients with chronic renal failure the mean terminal half-life was found to be 19.5 hours. The mean acyclovir half-life during haemodialysis was 5.7 hours. Plasma acyclovir levels dropped approximately 60% during dialysis.

Hypersensitivity to acyclovir or valacyclovir, or to any of the excipients

Interaction with other medicinal products:

Acyclovir is eliminated primarily unchanged in the urine via active renal tubular secretion. Any drugs administered concurrently that compete with this mechanism may increase acyclovir plasma concentrations. Probenecid and cimetidine increase the AUC of acyclovir by this mechanism, and reduce acyclovir renal clearance. Similarly increases in plasma AUCs of acyclovir and of the inactive metabolite of mycophenolate mofetil.

Category B, Caution should however be exercised by balancing the potential benefits of treatment against any possible hazard.

Following oral administration of 200mg acyclovir five times a day, acyclovir has been detected in breast milk at concentrations ranging from 0.6 to 4.1 times the corresponding plasma levels. These levels would potentially expose nursing infants to acyclovir dosages of up to 0.3mg/kg/day. Caution is therefore advised if Virax is to be administered to a nursing woman.

Treatment of herpes simplex infections: 200mg five times daily at approximately four hourly intervals omitting the night time dose. Treatment should continue for 5 days, but in severe initial infections this may have to be extended.

In severely immunocompromised patients (e.g. after marrow transplant) or in patients with impaired absorption from the gut the dose can be doubled to 400mg or alternatively intravenous dosing could be considered.

Many patients may be conveniently managed on a regimen of 400mg twice daily at approximately twelve-hourly intervals.

Therapy should be interrupted periodically at intervals of six to twelve months, in order to observe possible changes in the natural history of the disease.

In severely immunocompromised patients (e.g. after marrow transplant) or in patients with impaired absorption from the gut, the dose can be doubled to 400mg or, alternatively, intravenous dosing could be considered.

In severely immunocompromised patients (e.g. after marrow transplant) or in patients with impaired absorption from the gut, consideration should be given to intravenous dosing.

Treatment should continue for five days.

Dosage in the Elderly:

Adequate hydration should be maintained.

Symptoms & signs: Aciclovir is only partly absorbed in the gastrointestinal tract. Patients have ingested overdoses of up to 20g aciclovir on a single occasion, usually without toxic effects. Accidental, repeated overdoses of oral aciclovir over several days have been associated with gastrointestinal effects (such as nausea and vomiting) and neurological effects (headache and confusion)

Management: Patients should be observed closely for signs of toxicity. Haemodialysis significantly enhances the removal of aciclovir from the blood and may, therefore, be considered a management option in the event of symptomatic overdose.