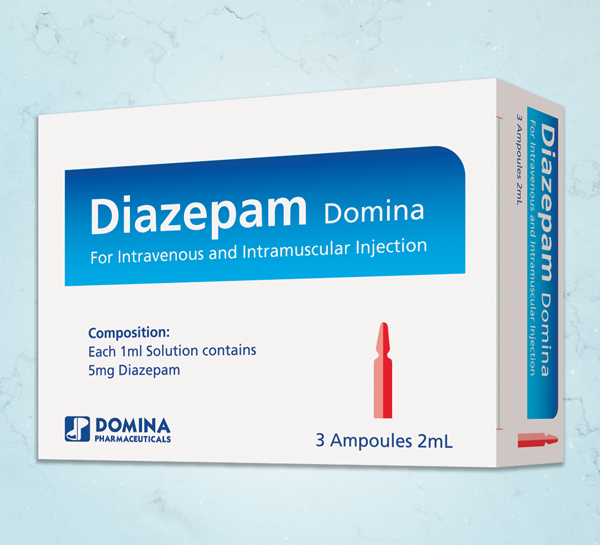 Diazepam Domina injection may be used in severe or disabling anxiety and agitation, for the control of status epilepticus, epileptic and febrile convulsions.

It is also used to relieve muscle spasm, as a sedative in minor surgical and dental procedures, or other circumstances in which a rapid effect is required.

In adults: Administer by direct IV injection slowly at a rate not exceeding 1ml/min .

In children: administration should be over not less than 3 minutes.

Elderly or debilitated patients should be given not more than half of the usual dose.

Not recommended, dosage has not been established and Diazepam Domina injection contains benzyl alcohol which should be avoided in injections to neonates.

Known sensitivity to benzadiazepines or any of the ingredients, respiratory depression, acute pulmonary insufficiency, sleep apnoea syndrome, severe hepatic impairment, not for chronic psychosis, should not be used alone in depression or in anxiety with depression, avoid the product on neonates.

There is no evidence regarding the safety of the product in pregnancy. It should not be used, especially in the first and third trimesters, unless the benefits are considered to outweigh the risks. If the product prescribed to a woman of childbearing potential, she should be warned to contact her physician regarding the discontinuance of the product if she intends to become or suspects that she is pregnant. Since benzodiazepines are found in the breast milk, benzodiazepines should not be given to breast feeding mothers.