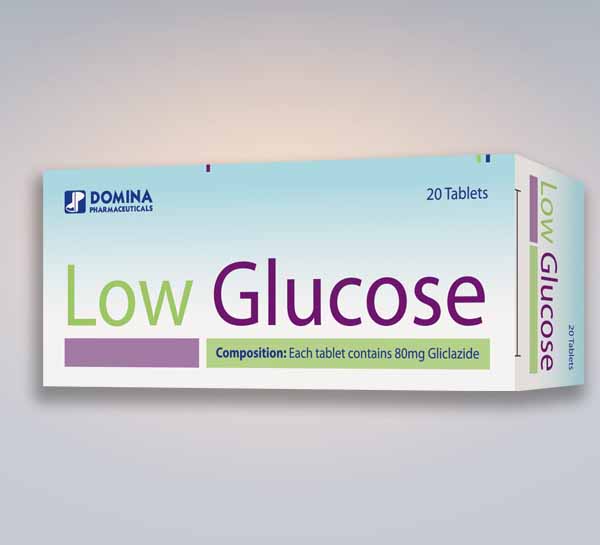 LOW Glucose is a hypoglycemic sulphonylurea differing form other related compounds by the addition of an azabicyco-octan ring.

In man, apart from having similar hypoglycemic effect similar to the other sulphonylureas, LOW Glucose has been shown to reduce platelet adhesiveness and aggregation and increase fibrinolytic activity. These factors are thought to be implicated in the pathogenesis of long term complications of diabetes mellitus.

LOW Glucose primarily enhances the first phase of insulin secretion, but also to a lesser degree its second phase. Both phases are diminished in non insulin dependent diabetes mellitus.

Children: It is not indicated for the treatment of juvenile onset diabetes mellitus.

Adults: The total daily dose may vary from 40 to 320mg taken orally. The dose should be adjusted according to the individual patient's response, starting with 40-80mg daily (1/2 – 1 tablet) and increasing until adequate control is achieved. A single dose should not exceed 160mg (2 tablets). When higher dose are required, LOW-Glucose should be taken twice daily and according to main meals of the day.

In obese patients or those not showing adequate response to LOW Glucose alone, additional therapy may be required.

Elderly: Plasma clearance of gliclazide is not altered in the elderly and steady state plasma level can therefore be expected to be similar to those in adults under 65 years. Clinical experience in the elderly to date shows that LOW Glucose is effective and well tolerated. Care should be exercised, however, when prescribing sulphonylureas in the elderly due to a possible age-related increased risk of hypoglycemia.

Hypoglycemia. Mild gastrointestinal disturbances including nausea, dyspepsia, diarrhea, constipation, but this type of side effects can be avoided if LOW Glucose is taken during a meal. Skin reactions including rash, pruritus, erythema. Blood disorders including anemia, leukopenia, thrombocytopenia and granulocytopenia have been observed during treatment but are not known to be directly attributable to the drug. There are rare reports of hepatic failure, hepatitis and jaundice following treatment with gliclazide.

The drug should not be used in:

Patients known to have hypersensitivity to other sulphonylureas and related drugs. Juvenile onset diabetes. Diabetes complicated by ketosis and acidosis. Pregnancy. Diabetics undergoing surgery, after severe trauma or during infections. Diabetic pre-coma and coma. Severe renal or hepatic insufficiency.

Care should be taken when giving LOW Glucose with drugs which are known to alter the diabetic state or potentiate the drug's action.

It may be diminished by corticosteroids, oral contraceptives, thiazide diuretics, phenothiazine derivates, thyroid hormones and abuse of laxatives.

Hypoglycemia: All sulphonylurea drugs are capable of producing moderate or severe hypoglycemia; particularly in the following conditions:

In patients controlled by diet alone.

In cases of accidental overdose.

When calorie or glucose intake is deficient.

In patients with hepatic and/or renal impairment, however, in long term clinical trails, patients with renal insufficiency have been treated satisfactorily using LOW Glucose at reduced doses.

In order to reduce the risk of hypoglycemia it is therefore recommended:

To initiate treatment for non insulin dependent diabetics by diet alone, if this is possible.

To take into account the age of the patient, blood sugar levels not strictly controlled by diet alone might be acceptable in the elderly.

To adjust the dose of LOW Glucose according to the glucose response and to the 24 hours urinary glucose during the first days of treatment.

Dosage adjustments may be necessary:

On the occurrence of mild symptoms of hypoglycemia (sweating, pallor, hunger, pangs, tachycardia, sensation of malaise). Such findings should be treated with oral glucose and adjustments made in drug dosage and/or meal patterns.

On the occurrence of sever hypoglycemia reactions (coma or neurological impairment).

Loss of control of blood glucose (hyperglycemia). When a patient stabilized on any diabetic regimen is exposed to stress such as fever, trauma, infection or surgery, a loss of control may occur. At such times, it may be necessary to increase progressively the dosage of LOW Glucose and if this is insufficient, to discontinue the treatment and to administer insulin.

Care should be exercised in patients with hepatic and/or renal impairment and a small starting dose should be used with careful patient monitoring.

Patients should be informed that their concentration may be affected if their diabetes is not satisfactorily controlled, especially at the beginning of the treatment.

USE IN PREGNANCY AND LACTATION:

Lactation: It has not been established whether gliclazide is transferred to human milk. However, other sulphonylureas have been found in milk.

The drug is well absorbed and its half life in man is approximately 10-12 hours. Gliclazide is metabolized in the liver.