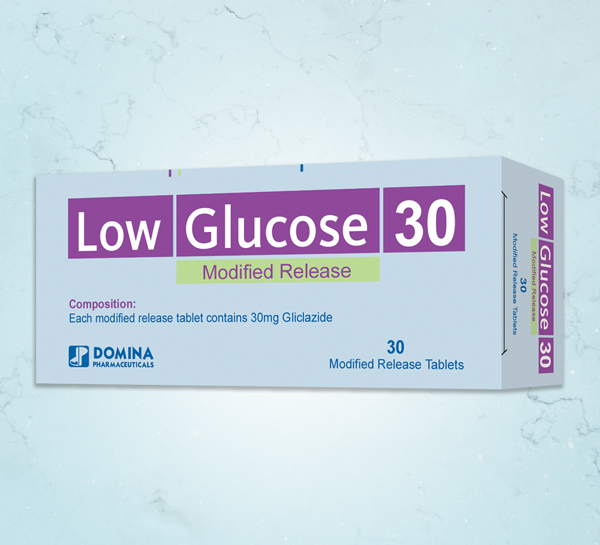 Gliclazide reduces blood glucose levels by stimulating insulin secretion from the β-cells of the islets of Langerhans. In addition to these metabolic properties, gliclazide has haemovascular properties.

Haemovascular properties: Gliclazide decreases microthrombosis which may be involved in complications of diabetes.

Absorption: Gliclazide is completely absorbed. Food intake does not affect the rate or degree of absorption.

Elimination: Gliclazide is mainly metabolised in the liver and excreted in the urine, the elimination half-life of gliclazide varies between 12 and 20 hours.

Posology and method of administration:

The daily dose may vary from 30 to 120 mg per day taken orally in a single intake at breakfast time.

If a dose is forgotten, there must be no increase in the dose taken the next day.

As with any hypoglycaemic agent, the dose should be adjusted according to the individual patient's metabolic response (blood glucose, HbAlc).

A transitional period is not generally necessary. A starting dose of 30 mg should be used and this should be adjusted to suit the patient's blood glucose response, as described above. When switching from a hypoglycaemic sulphonylurea with aprolonged half-life, a treatment free period of a few days may be necessary to avoid an additive effect of the two products, which might cause hypoglycaemia.

The procedure described for initiating treatment should also be used when switching to treatment with Gliclazide, i.e. a starting dose of 30 mg/day, followed by a stepwise increase in dose, depending on the metabolic response.

Combination treatment with other anti-diabetic agents: Gliclazide can be given in combination with biguanides, alpha glucosidase inhibitors or insulin. In patients not adequately controlled with Gliclazide, concomitant insulin therapy can be initiated under close medical supervision.

Patients with mild to moderate renal insufficiency: The same dosing regimen can be used as in patients with normal renal function with careful patient monitoring.

It is recommended that the minimum daily starting dose of 30 mg is used.

Paediatric population: The safety and efficacy of Gliclazide in children and adolescents has not been established.

Some cases of Hypoglycaemia may be severe and prolonged. Hospitalisation may be necessary and glucose administration may need to be continued for several days.

Factors which increase the risk of hypoglycaemia:

Anticoagulant therapy (e.g. warfarin): Sulphonylureas may lead to potentiation of anticoagulation during concurrent treatment. Adjustment of the anticoagulant may be necessary.

There is no experience with the use of gliclazide during pregnancy in humans. Control of diabetes should be obtained before the time of conception to reduce the risk of congenital abnormalities linked to uncontrolled diabetes.

It is not known whether gliclazide or its metabolites are excreted in breast milk. Given the risk of neonatal hypoglycaemia, gliclazide is contra-indicated in breast-feeding mothers.

gliclazide has no known influence on the ability to drive and use machines. However, patients should be made aware of the symptoms of hypoglycaemia and should be careful if driving or operating machinery, especially at the beginning of treatment.

Usually, symptoms disappear after intake of carbohydrates (sugar). However, artificial sweeteners have no effect. Experience with other sulphonylureas shows that hypoglycaemia can recur even when measures prove effective initially.

If a hypoglycaemic episode is severe or prolonged, and even if it is temporarily controlled by intake of sugar, immediate medical treatment or even hospitalisation is required.

Other undesirable effects: Gastrointestinal disturbances, including abdominal pain, nausea, vomiting, dyspepsia, diarrhoea and constipation have been reported. These can be avoided or minimised if gliclazide is taken with a meal.

The following undesirable effects have been more rarely reported:

The following adverse events have been described for other sulphonylureas: Erythrocytopenia, agranulocytosis, haemolytic anaemia, pancytopenia, allergic vasculitis, hyponatraemia, elevated liver enzyme levels and even impairment of liver function and hepatitis, which regressed after withdrawal of the sulphonylurea or led to life-threatening liver failure in isolated cases.

An overdose of sulphonylureas may cause hypoglycaemia. Moderate symptoms of hypoglycaemia, without any loss of consciousness or neurological signs, must be corrected by carbohydrate intake, dose adjustment and/or change of diet. Strict monitoring should be continued until the doctor is sure that the patient is out of danger.

Severe hypoglycaemic reactions, with coma, convulsions or other neurological disorders are possible and must be treated as a medical emergency, requiring immediate hospitalisation.

Dialysis is of no benefit to patients due to the strong binding of gliclazide to proteins.