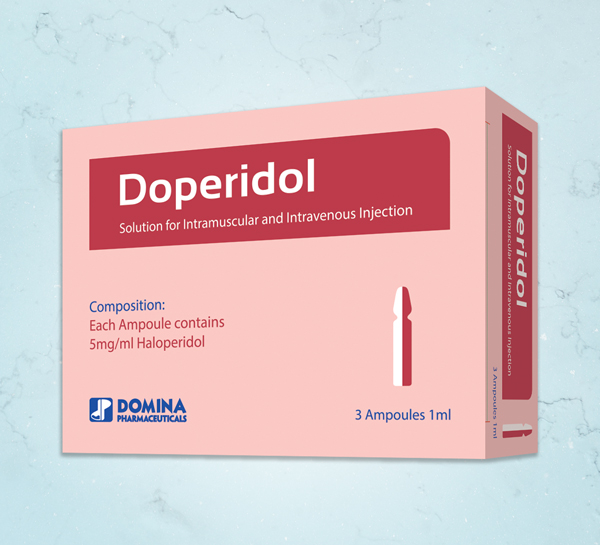 Haloperidol is an antipsychotic belonging to the butyrophenones group. It is a potent central dopamine type 2 receptor antagonist, and at recommended doses, has low alpha-1 antiadrenergic activity and no antihistaminergic or anticholinergic activity.

- Rapid control of severe acute psychomotor agitation associated with psychotic disorder or manic episodes of bipolar I disorder when oral therapy is not appropriate.

- Acute treatment of delirium when non-pharmacological treatments have failed.

- Treatment of mild to moderate chorea in Huntington's disease, when other medicinal products are ineffective or not tolerated, and oral therapy is not appropriate.

A low initial dose is recommended and this must be adjusted according to the patient's response in order to determine the minimal effective dose .

Haloperidol dose recommendations for adults aged 18 years and above:

1- Rapid control of severe acute psychomotor agitation associated with psychotic disorder or manic episodes of bipolar I disorder when oral therapy is not appropriate:

• May be repeated hourly until sufficient symptom control is achieved.

• In the majority of patients, doses up to 15 mg/day are sufficient. The maximum dose is 20 mg/day.

2- Acute treatment of delirium when non-pharmacological treatments have failed:

• Treatment should be started at the lowest possible dose, and the dose should be adjusted in increments at 2- to 4 hour intervals if agitation continues, up to a maximum of 10 mg/day.

3- Treatment of mild to moderate chorea in Huntington's disease, when other medicinal products are ineffective or not tolerated, and oral therapy is not appropriate:

• May be repeated hourly until sufficient symptom control is achieved or up to a maximum of 10 mg/day.

4- Single or combination prophylaxis in patients at moderate to high risk of postoperative nausea and vomiting, when other medicinal products are ineffective or not tolerated:

• 1 to 2 mg intramuscularly, at induction or 30 minutes before the end of anaesthesia.

5- Combination treatment of postoperative nausea and vomiting when other medicinal products are ineffective or not tolerated:

Gradual withdrawal of haloperidol is advisable

The recommended initial haloperidol dose in elderly patients is half the lowest adult dose according to the patient's response.

The maximum dose is 5 mg/day.

Hepatic impairment: Since haloperidol is extensively metabolised in the liver, it is recommended to halve the initial dose. Further doses may be administered and adjusted according to the patient's response.

Children under 18 years and adolescents: the safety has not been established.

- Hypersensitivity to the active substance or to any of the excipients.

- Concomitant treatment with medicinal products that prolong the QT interval

1- Increased mortality in elderly people with dementia: Rare cases of sudden death have been reported in psychiatric patients receiving antipsychotics, including haloperidol

typical 10 week controlled study, the rate of death in patients treated with antipsychotics was about 4.5%, compared to a rate of

about 2.6% in the placebo group. Although the causes of death were varied, most of the deaths appeared to be either

treatment of elderly patients with haloperidol is also associated with increased mortality. This association may be stronger for

haloperidol than for atypical antipsychotic medicinal products, is most pronounced in the first 30 days after the start of

treatment, and persists for at least 6 months.

3- Haloperidol solution for injection is not indicated for the treatment of dementia-related behavioural disturbances.

- QTc prolongation and/or ventricular arrhythmias, in addition to sudden death, have been reported with haloperidol

The risk of these events appears to increase with high doses, high plasma concentrations, in predisposed patients or with parenteral use, particularly intravenous administration.

- Haloperidol solution for injection is recommended for intramuscular administration only. However, if administered intravenously, continuous ECG monitoring must be performed for QTc interval prolongation and for ventricular arrhythmias.

- Caution is advised in patients with bradycardia, cardiac disease, family history of QTc prolongation or history of heavy alcohol

- A baseline ECG is recommended before intramuscular dosing. During therapy, the need for ECG monitoring for QTc interval

prolongation and for ventricular arrhythmias must be assessed in all patients, but continuous ECG monitoring is recommended

for repeated intramuscular doses. ECG monitoring is recommended up to 6 hours after administration of Haloperidol solution

for injection to patients for prophylaxis or treatment of postoperative nausea and vomiting. Whilst on therapy, it is recommended to reduce the dose if QTc is prolonged, but haloperidol must be discontinued if the QTc exceeds 500 ms.

- Electrolyte disturbances such as hypokalaemia and hypomagnesaemia increase the risk for ventricular arrhythmias and must be corrected before treatment with haloperidol is started. Therefore, baseline and periodic electrolyte monitoring is recommended.

- In randomised, placebo-controlled clinical studies in the dementia population, there was an approximately 3-fold increased risk

The mechanism for this increased risk is not known.

- Haloperidol must be used with caution in patients with risk factors for stroke.

- Haloperidol has been associated with neuroleptic malignant syndrome: a rare idiosyncratic response characterized by

phosphokinase levels. Hyperthermia is often an early sign of this syndrome.

Tardive dyskinesia may appear in some patients on long-term therapy or after discontinuation of the medicinal product. The

syndrome is mainly characterized by rhythmic involuntary movements of the tongue, face, mouth or jaw. The manifestations

may be permanent in some patients. The syndrome may be masked when treatment is reinstituted, when the dose is increased.

or when a switch is made to a different antipsychotic. If signs and symptoms of tardive dyskinesia appear, the discontinuation of

all antipsychotics, including haloperidol, must be considered.

- The use of haloperidol has been associated with the development of akathisia, characterised by a subjectively unpleasant or distressing restlessness and need to move, often accompanied by an inability to sit or stand still. This is most likely to occur within the first few weeks of treatment. In patients who develop these symptoms, increasing the dose may be detrimental.

- Acute dystonia may occur during the first few days of treatment with haloperidol, but later onset as well as onset after dose

increases has been reported. Dystonic symptoms can include, but are not limited to, torticollis, facial grimacing, trismus, tongue

protrusion, and abnormal eye movements, including oculogyric crisis. Males and younger age groups are at higher risk of

- Antiparkinson medicinal products of the anticholinergic type may be prescribed as required to manage extrapyramidal symptoms, but it is recommended that they are not prescribed routinely as a preventive measure. If concomitant treatment with an antiparkinson medicinal product is required, it may have to be continued after stopping haloperidol if its excretion is faster than that of haloperidol in order to avoid the development or aggravation of extrapyramidal symptoms. The possible increase in

are administered concomitantly with haloperidol.

It has been reported that seizures can be triggered by Haloperidol. Caution is advised in patients suffering from epilepsy and in conditions predisposing to seizures (e.g. alcohol withdrawal and brain damage).

As haloperidol is metabolised by the liver, half the initial dose and caution is advised in patients with hepatic impairment.

Isolated cases of liver function abnormalities or hepatitis, most often cholestatic, have been reported.

- Thyroxin may facilitate Haloperidol toxicity. Antipsychotic therapy in patients with hyperthyroidism must be used only with

caution and must always be accompanied by therapy to achieve an euthyroid state.

- Hormonal effects of antipsychotic neuroleptic drugs include hyperprolactinaemia, which may cause galactorrhoea,

gynaecomastia and oligo or amenorrhoea.

tumours may be stimulated by prolactin.

Hypoglycaemia and syndrome of inappropriate antidiuretic hormone secretion have been reported with haloperidol.

during treatment with Haloperidol and preventive measures undertaken.

- In schizophrenia, the response to antipsychotic treatment may be delayed.

If antipsychotics are withdrawn, recurrence of symptoms related to the underlying condition may not become apparent for

There have been very rare reports of acute withdrawal symptoms (including nausea, vomiting and insomnia) after abrupt

withdrawal of high doses of antipsychotics. Gradual withdrawal is advisable as a precautionary measure.

It is recommended that haloperidol is not used alone in patients in whom depression is predominant. It may be combined with

antidepressants to treat those conditions in which depression and psychosis coexist.

3- Switch from mania to depression

There is a risk in the treatment of manic episodes of bipolar disorder for patients to switch from mania to depression. Monitoring

to intervene when such switches occur.

are coadministered a CYP3A4 inhibitor.

enzyme inducers of CYP3A4 such as: Carbamazepine, phenobarbital, phenytoin, rifampicin.

4- Effect of haloperidol on other medicinal products:

- Haloperidol may antagonise the effect of levodopa and other dopamine agonists

USE IN PREGNANCY AND LACTATION:

It is preferable to avoid the use of haloperidol during pregnancy.

Haloperidol has a moderate influence on the ability to drive and use machines. Some degree of sedation or impairment of alertness may occur. Particularly with higher doses and at the start of treatment and may be potentiated by alcohol. It is

recommended that patients be advised not to drive or operate machines during treatment, until their susceptibility is known.

Absorption: haloperidol is completely absorbed. Peak plasma concentrations of haloperidol are attained within 20 to 40 minutes.

Haloperidol is extensively metabolised in the liver. The main metabolic pathways of haloperidol in humans include

glucuronidation, ketone reduction, oxidative N-dealkylation and formation of pyridinium metabolites. The metabolites of

haloperidol are not considered to make a significant contribution to its activity; however, cannot be fully ruled out. The cytochrome P450 enzymes CYP3A4 and CYP2D6 are involved in haloperidol metabolism.

Inhibition or induction of CYP3A4, or inhibition of CYP2D6, may affect haloperidol metabolism. A decrease in CYP2D6 enzyme

Elimination: The terminal elimination half-life of haloperidol is on average 21 hours after intramuscular administration.

The manifestations of haloperidol overdose are an exaggeration of the known pharmacological effects and adverse reactions.

manifest by muscular rigidity and a generalised or localised tremor. Hypertension rather than hypotension is also possible.

In extreme cases, the patient would appear comatose with respiratory depression and hypotension that could be severe

enough to produce a shock-like state. The risk of ventricular arrhythmias, possibly associated with QTc prolongation, must be

There is no specific antidote. Treatment is supportive. Dialysis is not recommended in the treatment of overdose because it

For comatose patients, a patent airway must be established by use of an oropharyngeal airway or endotracheal tube.

It is recommended that ECG and vital signs be monitored, and that monitoring continues until the ECG is normal. Treatment of

Hypotension and circulatory collapse may be counteracted by use of intravenous fluids, plasma or concentrated albumin and

vasopressor agents, such as dopamine or noradrenaline. Adrenaline must not be used because it might cause profound

hypotension in the presence of haloperidol.

In cases of severe extrapyramidal reactions, parenteral administration of an antiparkinson medicinal product is recommended