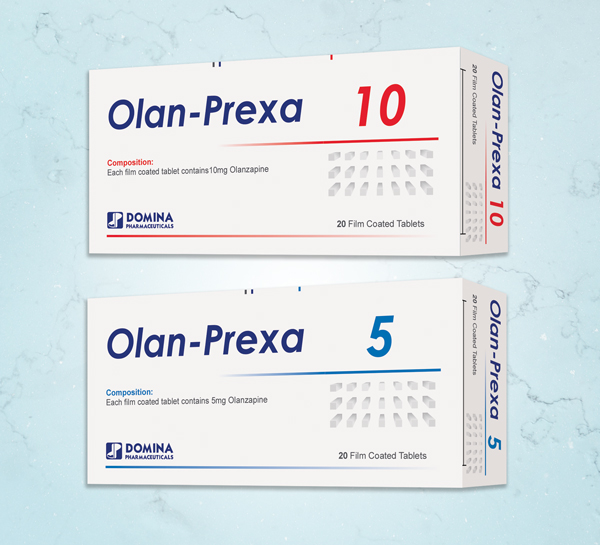 Olan-Prexa is indicated for the treatment of schizophrenia, acute manic episodes and bipolar disorder.

It has not been studied in subjects under 18 years of age.

A lower starting dose of 5mg daily is not routinely indicated but should be considered for those 65th and over when clinical factors warrant.

Patients with Renal and/or Hepatic Impairment: A lower starting dose 5mg should be considered for such patients. In cases of moderate hepatic insufficiency (cirrhosis), the starting dose should be 5mg, and only increased with caution.

It is contraindication in patients with a known hypersensitivity to the product.

The only frequent undesirable effects associated with the use of the drug were somnolence and weight gain. Weight gain was related to a lower pre-treatment body mass and initial starting dose of 15mg or greater. Occasional undesirable effects associated with the use of olanzapine included, increased appetite, orthostatic hypotension, and mild, transient anticholinergic effects, including constipation and dry mouth. Transient, asymptomatic elevations of hepatic transaminases, ALT, AST have been seen occasionally, especially in early treatment. Olanzapine-treated patients had a lower incidence of parkinsonism, akathisia and dystonia compared with titrated doses of haloperidol. Seizures have been reported to occur rarely in patients treated with olanzapine. In most of these cases, a history of seizures or risk factors for seizures were reported.

Single doses of antacid (aluminum, magnesium, or cimetidine) did not affect the oral bioavailability of the drug. However, the concomitant administration of activated charcoal reduced the oral bioavailability of the drug by 50 to 60%. The metabolism of olanzepine may induced by smoking and carbamazepine, which may lead to reduce olanzepine concentration, only slight to moderate increase in olanzepine clearance has been observed. The pharmacokinetics of theophylline, which is metabolized by (P450-1A2), is not altered by the drug. No inhibition of the metabolism of imipramine /desipramin, warfarin, theophylline, or diazepam was evident. The drug showed no interaction when co-administered with lithium or biperiden.

This drug could be used in pregnancy only if the potential benefit justifies the potential risk to the fetus (C category). Patient should be advised not to breast feed an infant if they are taking the drug.