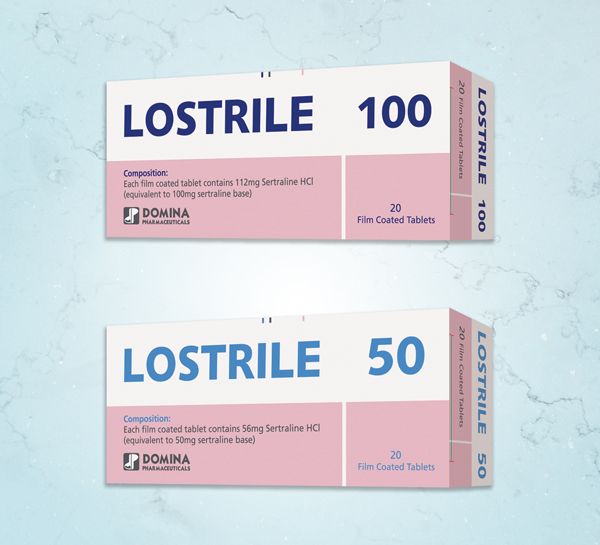 Each film coated tablet contains 56 or 112mg sertraline hydrochloride equivalent to 50 or 100mg sertraline base.

LOSTRILE is a potent and specific inhibitor of neuronal serotonin (5-HT) re-uptake, but without affinity for: muscarinic, dopaminergic, adrenergic, histaminergic, or GABA receptors.

LOSTRILE is indicated for the treatment of depressive illness symptoms.

• Initial dose: 50mg daily as a single daily dose with or without food.

• Maintenance dose: in patients with incomplete response but good toleration at lower doses, dosage adjustments should be made in 50mg increments over a period of weeks to a maximum of 200mg daily. Once optimal therapeutic response is achieved the dose should be reduced, depending on therapeutic response, to the lowest effective level.

• Maximum dose: 150mg or more should not be used for periods exceeding 8 weeks.

Some of these side effects could be occurred: Nausea, diarrhoea, dyspepsia, tremor, dizziness, insomnia, somnolence, increased sweating, dry mouth and rash. Asymptomatic elevations in serum transaminases (AST and AlT) have been reported infrequently in association with administration. The abnormalities usually occurred within the first weeks (1 to 9 weeks) of drug treatment and promptly diminished upon drug discontinuation.

It should not be used in combination with MOA inhibitors.

LOSTRILE interact with other plasma protein bound drug such as: Cimetidine, diazepam.

Co-administration of LOSTRILE (200mg daily) with warfarin resulted in an increase in warfarin effect, so the dosage should be adjusted.

• As with other antidepressants, activation of mania/hypomania has been reported in a small proportion of patients.

• Caution is advised when treating patients with renal or hepatic impairment.

• The use of product in children is not recommended.