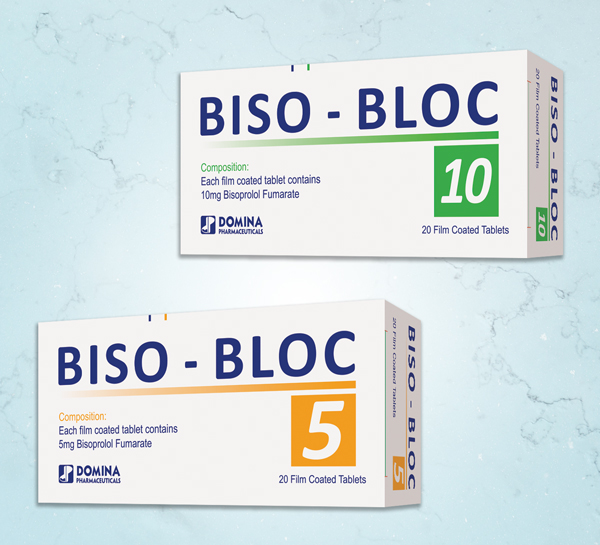 Biso-Bloc is a potent, highly β1-selective blocking agent. It depresses plasma renin activity, which leads to capillary dilatation. The blockade of β1-receptors, reduces heart action, and thus reduces oxygen demand. Biso-Bloc is effective in eliminating or reducing the symptoms of angina pectoris.

Biso-Bloc is indicated for the management of hypertension, angina pectoris.

The usual dose is 10mg once daily. The maximum recommended dose is 20mg daily. In some patients 5mg daily may be adequate, especially in elderly. In patients with final stage of renal or liver impairment, the dose should not exceed 10mg once daily.

To retain selectivity, it’s important to use the lowest effective dose

Biso-Bloc is usually well tolerated. It may rarely cause fatigue, dizziness, mild headache, muscle and joint ache, and coldness of extremities. Occasional gastrointestinal side effects may occur such as nausea, diarrhoea, and sleep disturbances.

The drug should not be combined with other beta-blocking agents. Biso-Bloc may potentiate the effect of other concurrently administered antihypertensive drugs such as reserpine, α-methyldopa, and clonidine. The therapy with clonidine must be discontinued for several days before bisoprolol administration. The drug should be used with care with myocardial depressants, inhibitors of AV conduction such as calcium antagonist (e.g. verapamil, diltiazem), or class I anti-arrhythmic (such as disopyramide). Rifampicin can reduce the elimination half life of the drug. The effects of insulin or oral hypoglycaemic agents may be potentiated when used concurrently with the drug. Particular care should be taken when anesthetic agents which depress myocardial function (such as ether, cyclopropane, and trichloroethylene).

Like other β-blockers benefits of use during pregnancy should be weighed against the possible risk. Caution should be exercised for use during lactation.